Happy National Mushroom Day! I’m Jennifer Burns Bright, a food and travel writer specializing in the Pacific Northwest, especially its wonderful wild foods. Foraging for mushrooms is one of my favorite activities, so when I have the good fortune to stay at Alderbrook, I relax by the canal, of course, but also by wandering around miles of groomed, forested trails right there on the resort property.

An easy 0.6-mile hike, the Big Tree Loop makes a pretty and awe-inspiring trek southeast of the Thimbleberry Bridge crossing. Even better? It’s positively vibrant with mushrooms in fall.

The old-growth fir and cedar aren’t the only big trees to notice on the hike. Fallen logs are alive with fungal decomposers. Many of these are called polypores or conks, which form woody, shelf-like growths in brown, yellow, pink, and red. 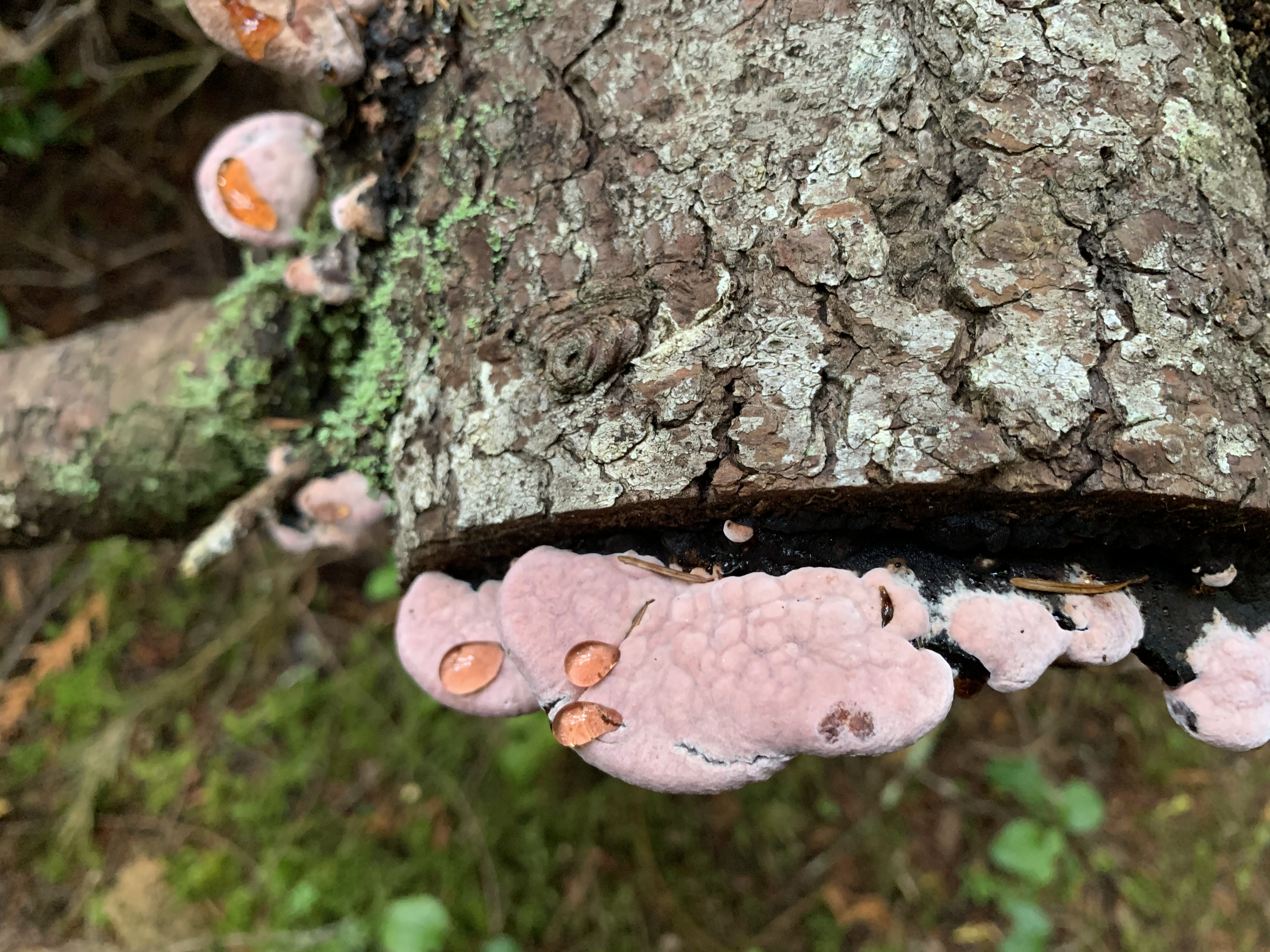 Definitely the prettiest of these is the Rosy Polypore (Rhodofomes cajanderi). You can find these growing on downed conifers (check around the tree that lies across the Big Tree Loop path). A chestnut-brown, knobby conk about 2-3 inches wide with dusty pink margins and pores on its underside, it likes to grow in clusters. This one actually exudes droplets of an amber or reddish liquid when it’s wet. Creepy! 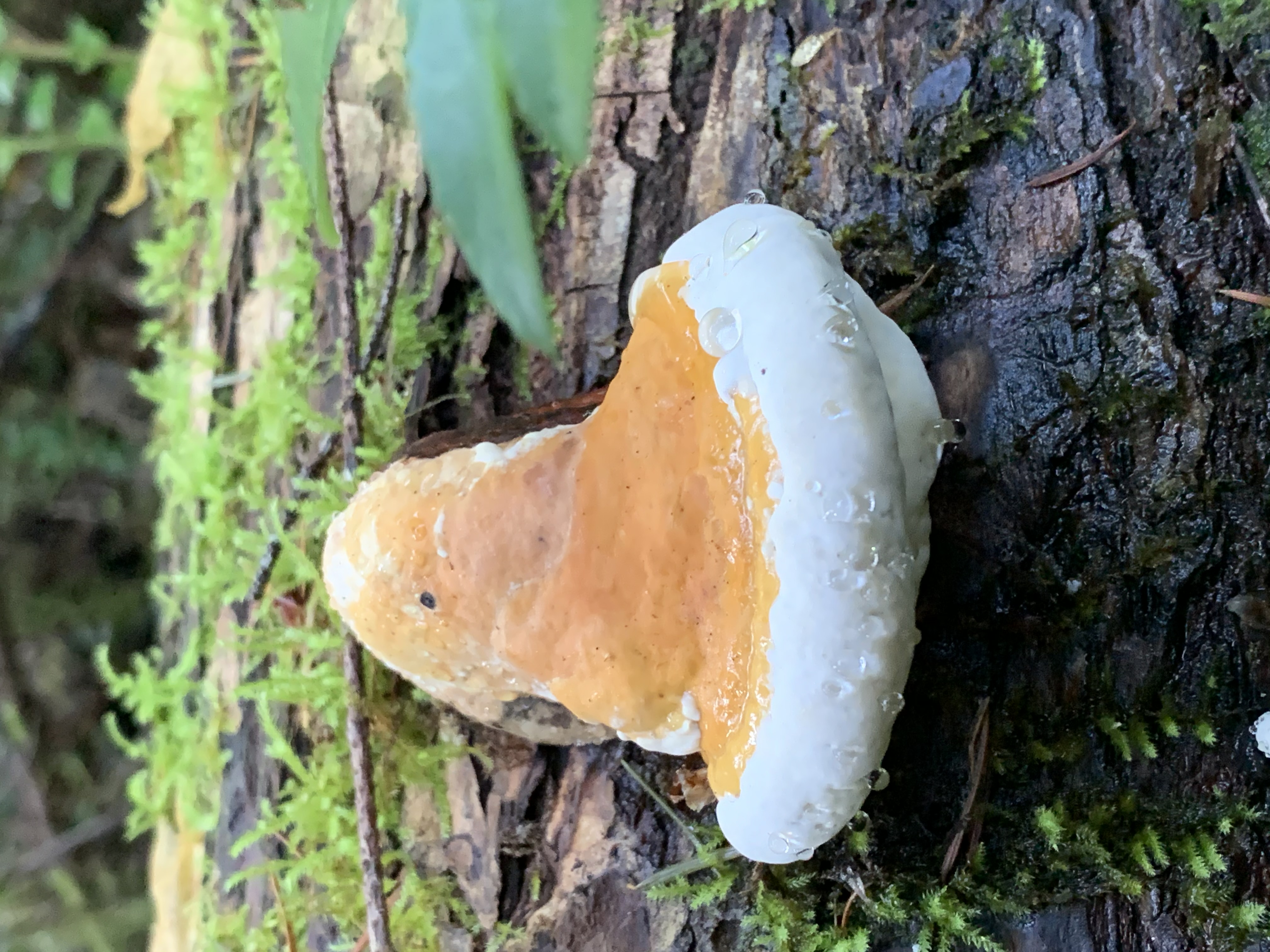 The striking Red-Belted Conk (Fomitopsis pinicola group) flourishes prolifically and perennially in our area. It’s much larger and less rare than the Rosy Polypore, and it often has red, yellow, and white bands circling a dark brown, hoof- or fan-shaped woody fruit body that likes to grow on dead conifers.  It initially emerges fresh and white and golden like the pictured specimen, exuding a clear liquid when wet.  These conks, like many polypores, have been used traditionally as medicine. 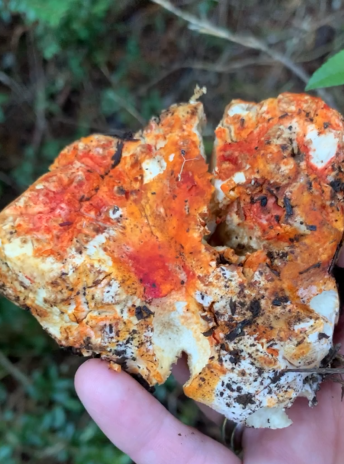 Meet the lobster mushroom (Hypomyces lactifluorum)! Is it possessed? Well, sort of. This bright orange stunner, whose name comes from the color of a cooked lobster shell, starts out as a white russula mushroom that is infected by a parasitic fungus underground, and it emerges from the earth like a zombie! As unlikely as it might seem, this mushroom is edible and delicious. You just need to cook it very well (to release toxins) before adding it to fried rice, omelets, or soups. 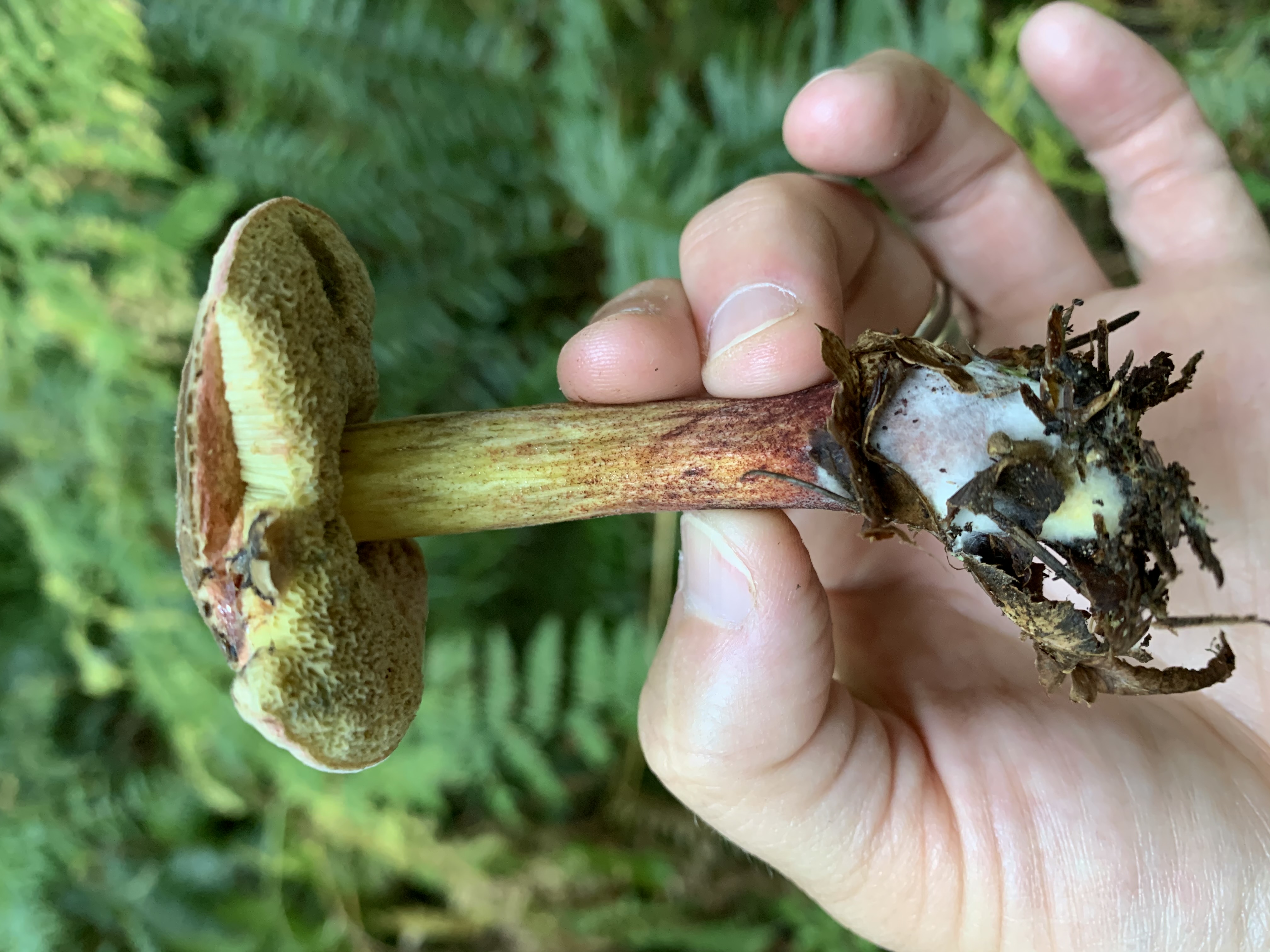 If you find a mushroom without gills, and instead a spongy pore layer underneath, it might very well be in the Boletus family, famous for the giant king bolete or porcini mushrooms. But many different kinds of boletes appear in PNW forests, including this one, which can be found along the paths on the Big Loop Trail in season. The Cracked-Cap Bolete (Xerocomellus diffractus) has a yellow and red striated stem and an olive cap with reddish tones under little cracks that appear.

Even cooler, if you press on the sponge or cut the mushroom in half, it will immediately turn blue. This is often an indicator of a toxic mushroom, so even though the Cracked-Cap may be edible, it’s probably best for beginners to avoid taking a taste without asking an expert for a sure ID. 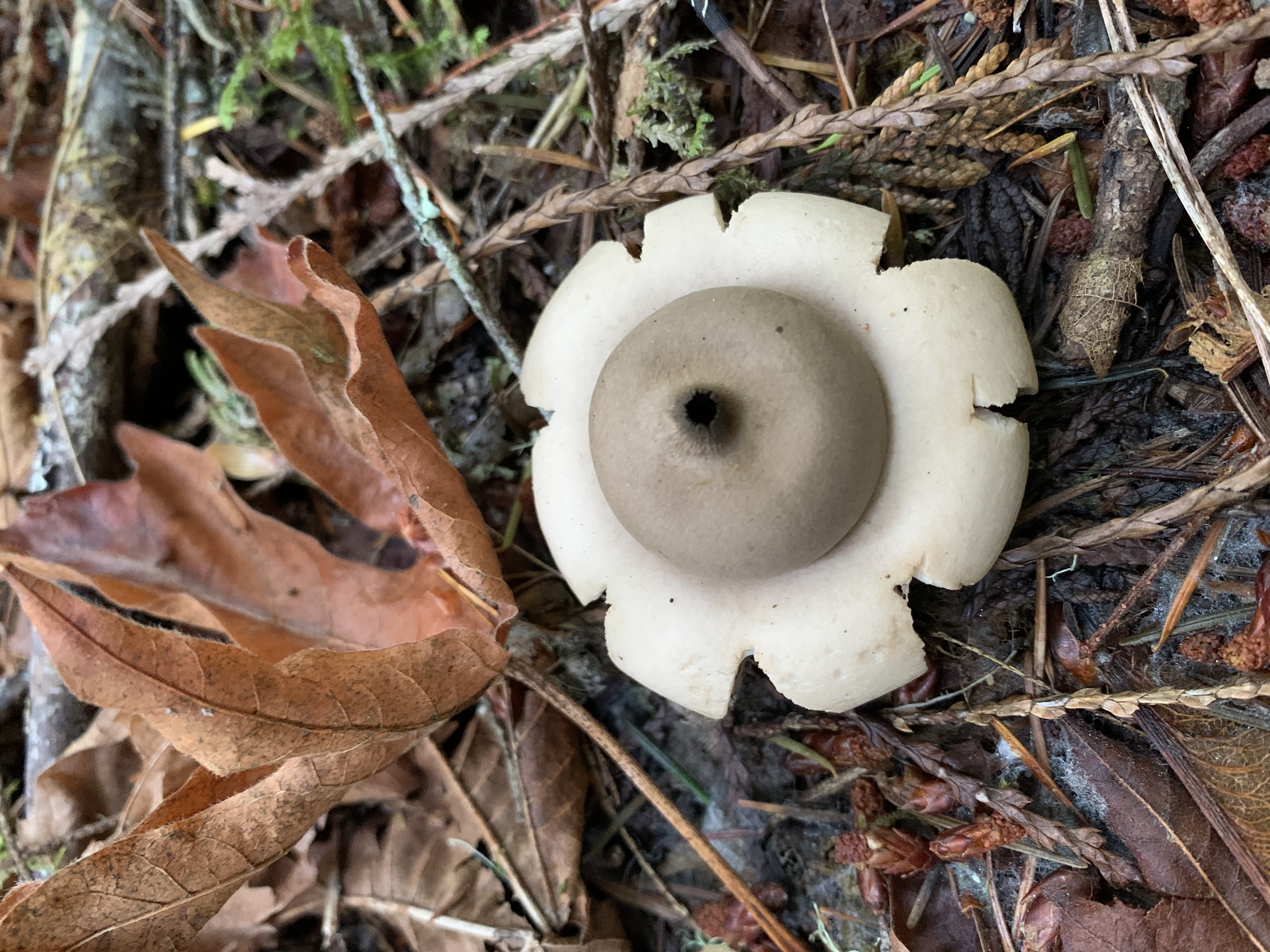 I saved the best one for last: the Bowl Earthstar (Geastrum saccatum). Scattered in clusters just off the path, keep your eyes peeled for little beige “flowers” with centers about two inches in diameter. The “petals” unfurl in a star shape, and the center holds not pollen but powdery spores that puff out when you squeeze mature specimens.  They’re one of the coolest mushrooms in the PNW, and always a treat to see them. The resort had dozens the last time I checked!

I hope you enjoyed this quick tour of some of the fungal delights on the trails at Alderbrook Resort. There are many, many more species of mushrooms out there. Take a photo and share with the resort if you’d like to know more about the ones you see. The trail stewards (and I) would be happy to identify them! 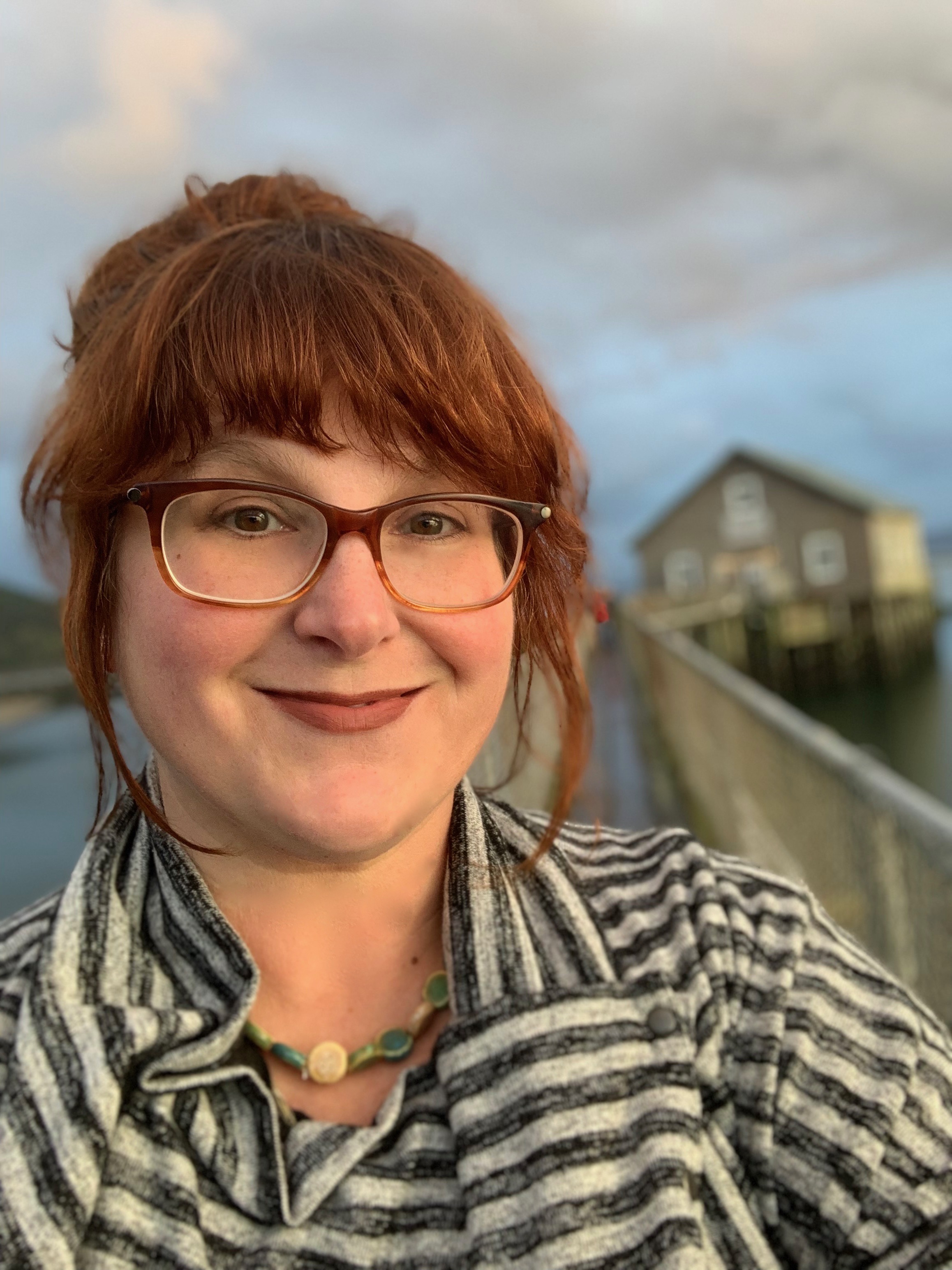 Jennifer Burns Bright is a food educator, recipe developer, and travel writer who covers the West Coast and the wild foods of the Pacific Northwest. Follow her Instagram account (@jenniferburnsbright) or check out her upcoming workshops or lectures on her website (jenniferburnsbright.com).